Technology IPOs have been white-hot, but will it continue?

Initial public offerings in the technology sector have performed quite well so far this year, particularly in the fintech and biotech sectors. Some of the most notable tech IPOs to date include Coinbase, UiPath, Affirm and Roblox.

The traditional IPO has historically been the most frequently used vehicle for tech companies that decide to go public. But Coinbase, Roblox and Squarespace— three of the year’s largest IPOs—chose a direct listing, and other companies such as SoFi chose a special purpose acquisition company (SPAC). Subsequent to their public debuts, these companies largely continue to provide investors with robust returns, as the weighted average offer-to-date performance of 2021 IPOs within the technology sector is 19.1% as of Aug. 9, according to Bloomberg.

After a busy July, the tech IPO market appears to have gone on vacation. The first week of August had four IPOs and four postponed, according to Renaissance Capital. This is a noticeable slowing in the IPO market, compared to 28 IPOs the last week of July. SPAC registrations continue to show strength, with seven of these “blankcheck IPOs” announced in the first week of August. 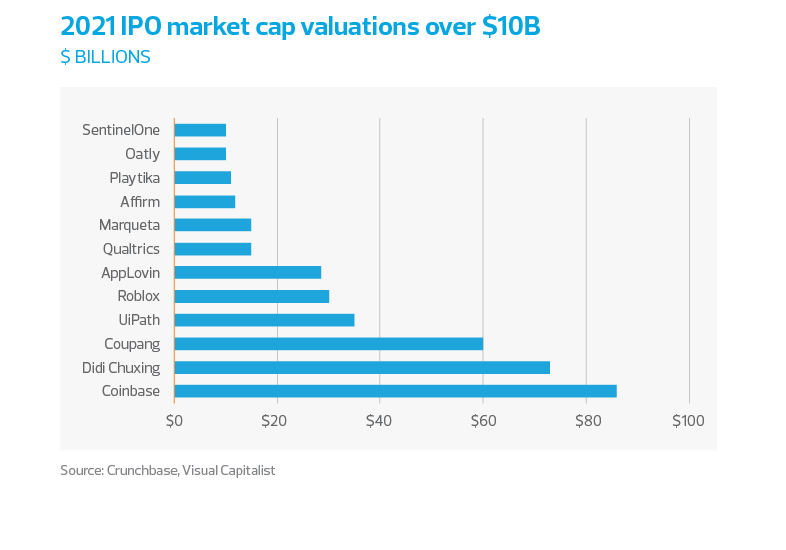 Eyes on the second half

As with many years in recent history, it is possible that some of the biggest companies going public are lined up for the second half of the year. Instacart, Databricks, Nextdoor, Rivian and Discord IPOs are some of the most highly anticipated debuts that are reportedly slated for the back half of this year.

Additionally, Stripe, one of the largest venture capitalbacked companies in the United States, is reportedly considering going public. Stripe has had a robust growth journey through the pandemic. In March 2021, the company raised $600 million in a Series H funding round, putting the company’s pre-money valuation at $94.4 billion. That’s nearly three times the company’s pre-money valuation of $35.15 billion 11 months earlier in April 2020, when the company raised its $850 million Series G round. Though Stripe’s debut as a public company may not take place in 2021, fintech investors will keep its expected eventual debut top of mind.

In summary, the IPO window appears to remain open in the back half of this year. Many of the technology companies that have provided crucial digital foundations of the U.S. economy’s infrastructure over the last 18 months are expected to cash in. Even beyond 2021, as a result of the rise of SPACs within the last year, we anticipate more technology companies will turn to the public markets for additional capital as well as liquidity for early investors.