Small and medium-size firms in crisis

The condition of small and medium-size firms implies a potential inflection point in the nascent economic rebound following the near shutdown of the economy last spring. Without further reform and support of the signature Paycheck Protection Program—which provided a vital lifeline to those firms during the worst of the pandemic—there will be an increase in bankruptcies, followed by another round of job losses, this time tilted toward the permanent elimination of jobs that support the bulk of the American middle and working classes.

With many of these businesses still struggling to survive, almost all of the PPP loans made to small and midsize firms will have to be forgiven to prevent a much larger round of permanent job losses. Since the onset of the crisis, we have made the case that roughly one quarter of the jobs lost during the initial part of the pandemic would be permanent. Recent data surveying small and middle market firms indicates that forecast may be somewhat optimistic. Moreover, the risk tolerance of the U.S. Treasury is going to have to increase in order for businesses to better utilize not only a replenished PPP, but also the $600 billion sitting on account at an underutilized Main Street Lending Program.

Much of the focus around the current policy impasse around a potential fifth round of fiscal aid has been on the status of the unemployed and the roughly $15 billion per week they stopped receiving on July 31. That is understandable, given the 28 million individuals on some form of unemployment insurance through mid-August, the millions more who have exhausted their state and pandemic emergency assistance, and the median duration of unemployment standing at 15 weeks. Yet the condition of the small and middle market firms that comprise the majority of the real economy is such that they will almost certainly need further aid and significant policy liberalization of the PPP and MSLP going forward.

Recent data culled from our proprietary RSM US Middle Market Business Index and the National Federation of Independent Business point to an increase in bankruptcies and unemployment later this year that will cause the aforementioned labor market dynamics to shift in a negative fashion and feature permanent job losses. 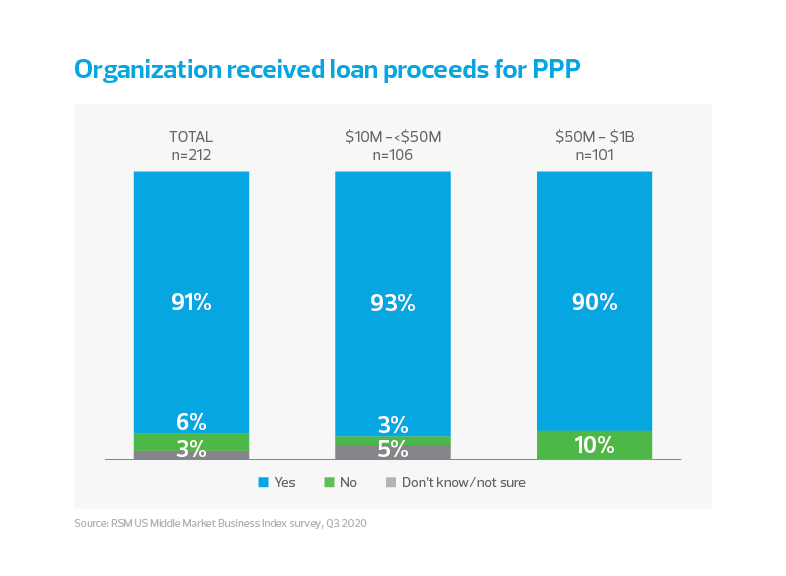 Roughly 91% of respondents in the July MMBI survey indicated that they had received a PPP loan, and that same metric said they planned to ask for forgiveness of those loans. However, only 68% expressed a high degree of confidence that those loans would be forgiven. 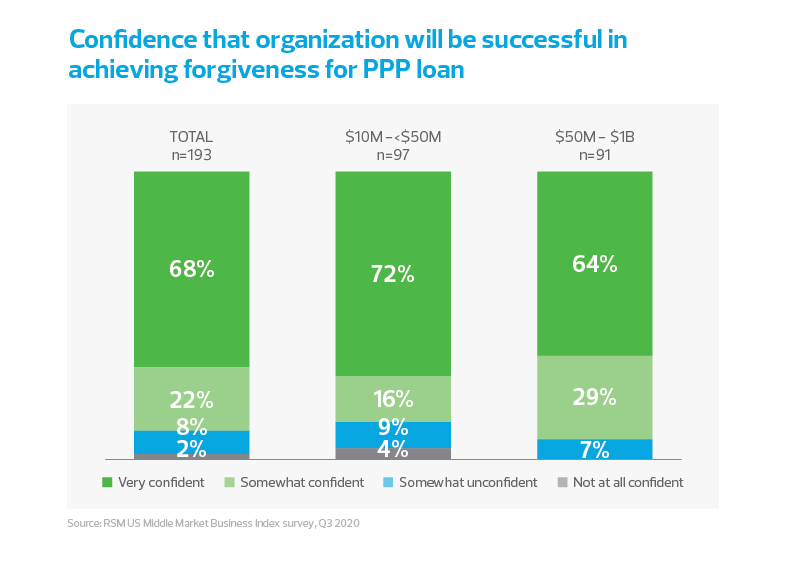 That imbalance is at the core of the growing risks to the economic outlook inside the real economy. With national consumption down 4.4% overall from January to Aug. 9, 2020, and with the expiration on July 31 of $60 billion per month of unemployment insurance that has boosted spending among low income groups by 1.1%, one gets the sense that the sound and fury from small and midsize enterprises will multiply at a geometric rate this fall.

A recent NFIB survey of 20,000 small firms conducted on Aug. 17–18 indicated that reduced revenues, fixed costs and an impaired economy have created the conditions where risks to long-run sustainability are rising. According to the survey, 21% of small firms indicate they will have to close their doors if the economy does not improve over the next six months, and another 19% indicate they will do the same over the next seven to 12 months if the economic status quo does not change for the better.

In short, with roughly 40% of small firms facing an existential crisis and 32% of midsize firms expecting the initial round of PPP loans will not be forgiven, economic conditions inside the real economy are not improving to the point where the overall economy will be able to generate enough momentum to achieve escape velocity from recession gravity, absent further aid from the federal government.

MIDDLE MARKET INSIGHT: With many of these businesses still struggling to survive, almost all of the PPP loans made to small and midsize firms will have to be forgiven to prevent a much larger round of permanent job losses.