Construction material costs have been rising since June, and the increase is having a big effect on the residential construction industry. Everything from lumber to asphalt to cement to insulation has soared in price as the homebuilding industry has heated up.

Part of the reason, in addition to rising demand, is that supplies have been constrained.

At the start of the pandemic, many suppliers cut their output expecting that the subsequent economic disruption would cause severe reduction in demand. However, that drop in demand never occurred.

Construction was deemed essential in most parts of the country, avoiding sustained shutdowns. In fact, homebuilding and renovation have been leaders in the post-pandemic economy as people flee crowded cities and move to the suburbs in search of more space.

It has all helped fuel prices of building supplies, with three materials, in particular, leading the charge—lumber, steel and copper. 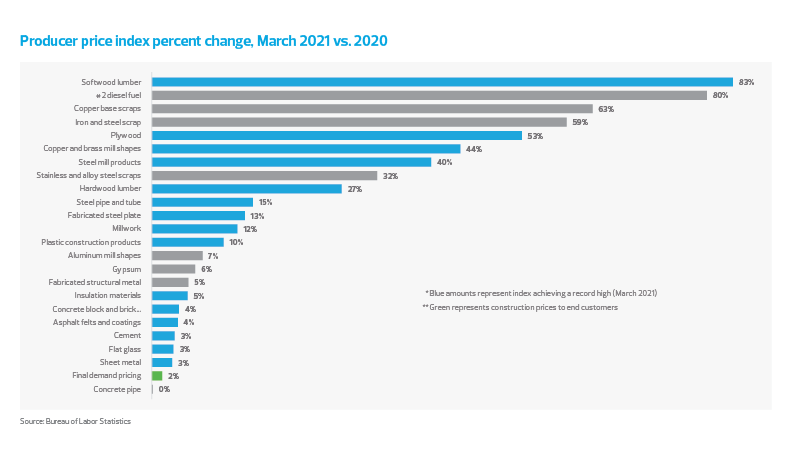 The price of lumber has skyrocketed over the past year, up more than 75% over pre-pandemic highs. The housing and remodeling indices from the National Association of Home Builders have both hit record highs in excess of 80 since September following initial drops at the pandemic’s onset last March (scores above 50 indicate expansion).

Prices show no signs of abating amid the surge in homebuilding driven by the receipt of stimulus money and higher consumer savings because of stay-at-home restrictions. Remote work is also supporting the trend, with many individuals forced to live, work and play at home.

Adding to the squeeze on supplies, wildfires struck the Pacific Northwest last fall, burning through forests slated for market. Many construction companies and suppliers have turned to central Europe to fulfill lumber orders. Forest Economic Advisors (FEA) has stated that it expects lumber imports in the United States to rise 14% to 15% for 2021.

Meanwhile, many U.S. companies will also have to compete with demand from China, which the FEA is expecting will boost lumber imports by 14% as its appetite for lumber grows. At the same time, industry lobbyists have urged the federal government to step in to help curb costs for consumers, with proposals, including immediate remedies to suppliers to boost production and reductions on import tariffs to reduce lumber prices.

Joe Brusuelas, RSM US chief economist, said the time may be right to revisit the tariffs that remain on Canadian lumber, which were reduced from 20% in December.

"Given the 83% increase in the cost of softwood lumber, the Biden administration may want to consider removing the 9% tariff on the import of Canadian lumber product to facilitate an easing of cost pressures for both producers and consumers in the construction market.”

Copper is also facing price increases because of demand growth and supply shortages and disruptions from the pandemic. Copper is a highly effective conduit used in residential and commercial electrical grids, as well as in most renewable energy systems to generate power from solar, hydro, thermal and wind energy systems.

According to an estimate from the investment bank Jefferies, placing 500,000 electric vehicle charging stations and converting 500,000 school buses to zero emissions would require approximately 200,000 tons of copper, representing a fivefold increase. On top of U.S. consumption, China, the world’s largest consumer of copper, is expected to need more of the essential metal as its economy recovers to pre-pandemic levels.

Bloomberg estimates that additional spending of approximately $100 billion would be needed by 2030 to close the anticipated 4.7 million metric ton gap in copper supplies. These long-term supply issues come on top of the short-term shocks caused by the COVID-19 pandemic. Chile and Peru are the two largest producers of copper, and both countries have had issues with keeping mining operations running.

In early April, Chile implemented renewed border protocols and has called on the mining sector to implement new safety measures to prevent the spread of the virus, including restrictions on special travel permits. These shocks to the global supply chain added to the rise in copper prices.

Unlike lumber and copper, steel has increased in price primarily because of supply slowdowns at the start of the pandemic. Many steel producers expected the market to become soft and idled their furnaces in March and April last year. But the slowdown never occurred, and demand for steel rebounded as the manufacturing sector led the economy out of the depths of the recession.

Even with the surge in demand, though, steel mill production capacity levels have remained below prior-year averages. Adjusted year-to-date steel production was at 76.6% of capacity through March, down 7.6% from 2020 levels, according to data from the American Iron and Steel Institute. These supply issues, coupled with steel tariffs put in place under the Trump administration, have resulted in U.S. steel prices that are significantly higher than global steel prices.

Steel-consuming manufacturers have asked Biden to reduce the tariffs to avoid having to pass these added costs on to customers. Some manufacturers have even elected to import steel despite the 25% tariff, because it is cheaper than the elevated price of domestic steel.

In addition to facing higher commodity prices, domestic producers now face an increase in shipping costs for cargo headed to the United States; the logjam is centered around Americans spending money on goods fulfilled in Chinese factories. U.S. demand for goods has outstripped the availability of containers in Asia to carry them to the United States, resulting in higher shipping rates. The result has been an extended delay at American seaports like those in Los Angeles and Long Beach, as ships wait to unload their cargo and as importers scramble to find empty containers to send back to Asia.

All of these factors have created havoc among logistics companies. Construction materials are no exception as these logistic challenges layer on even more costs on top of the already-higher prices for the materials. 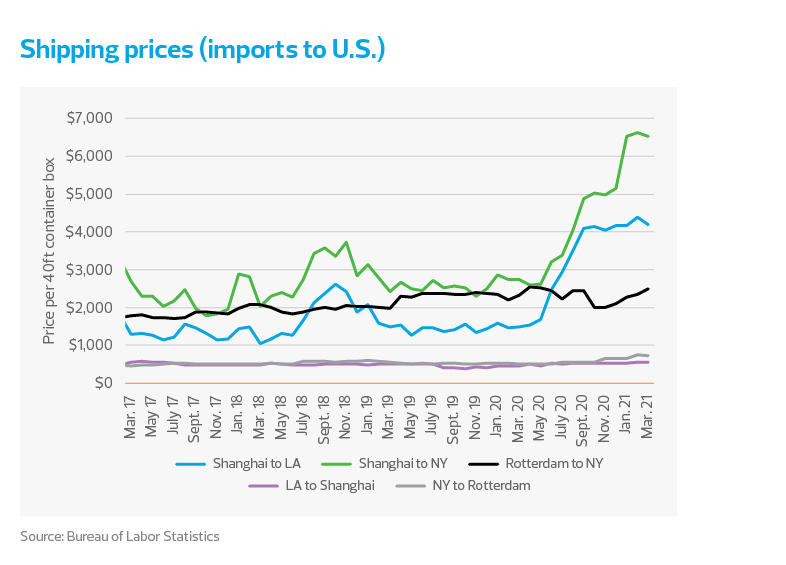 For construction companies, higher material and shipping costs are adding to margin pressures. Through the past year, final demand pricing for construction services has grown only 2% year over year through March. This means that contractors are absorbing these cost increases without passing them on to their customers, which can spell trouble for an industry that already operates on razor-thin margins.