The disruption of global supply chains will take years to work through and, in the near term, will almost certainly affect the critical holiday shopping season across the international economy.

Middle market firms in general and those with broad and deep exposure to apparel supply chains in the Far East more specifically should anticipate shortages of finished goods this year as economic shutdowns prompted by the spread of the delta variant interrupt the normal flow of goods.

Nowhere is this interruption more evident than in Vietnam, a leader in apparel and footwear manufacturing that has suffered an escalating series of economic lockdowns since July as the delta variant has spread.

Nike, for example, was downgraded recently by the Wall Street research firm BTIG, which cited significant supply disruption in Vietnam. Nike relies on Vietnam for more than 50% of its footwear production and 30% of its apparel units, BTIG said.

But the issue has gone well beyond Nike. Adidas, Lululemon, Columbia Sportswear, Under Armour, Capri Holdings—the parent company of Michael Kors and Versace—and VF Corp, which owns Vans and the North Face, all have major production bases in Vietnam.

The issue has become all the more acute because many companies shifted production to Vietnam as trade tensions between the United States and China escalated starting in 2018, and also because Vietnam was able to keep its economy mostly open during the initial waves of COVID-19 last year.

Now, even though Vietnam has started to relax some of its travel and work restrictions, its government has said that its economy will not be fully open until at least January. So at best, Vietnam will be limited to 50% to 70% of production capacity until the end of this year, on top of the full shutdown of production from July to September. And that scenario depends on the spread of COVID not worsening in Vietnam.

Middle market firms in general and those with broad and deep exposure to apparel supply chains in the Far East more specifically should anticipate shortages of finished goods.

For apparel and footwear companies, it could make for a difficult holiday shopping season, although just how difficult will be hard to measure. Companies often stock up goods ahead of time and their performance can be assessed only after data becomes available in their next public filings months from now.

But we expect that maintaining inventories, a challenge since early this year, will become more of a problem in the first half of next year.

The challenge is already showing up in the data. The inventory-to-sales spread, which calculates the difference in growth rates between inventories and sales, plunged for all major retail groups in the first two quarters of this year, from close to zero to less than negative 35% amid significant spikes in consumer demand.

The athleisure group, which includes Nike and Adidas, was heavily affected by Vietnam's supply disruption, posting a spread of negative 87% in the second quarter, while the apparel manufacturer group, which includes Capri Holdings, Columbia Sportswear and Under Armour, recorded the lowest spread in the same quarter at negative 119.7%.

Major department stores and off-price retailers, despite their more diverse sourcing portfolios, have also been affected by the supply chain disruption, dipping to negative 49.1% and negative 35.1% in second-quarter inventory-to-sales spreads, respectively. These include Kohl's, Macy's and Nordstrom. 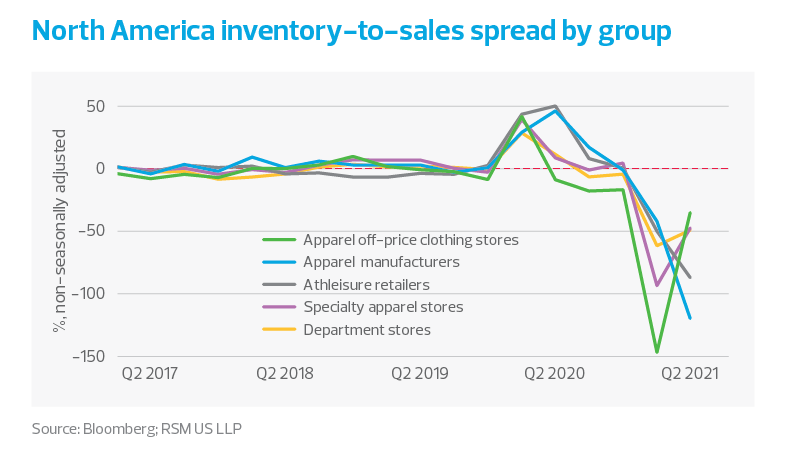 Even with these constraints, consumption is expected to increase well into next year as the spread of the delta variant eases, child tax credit payments continue and households use their high level of savings.

That elevated demand poses a challenge to hardest-hit companies like Nike and Under Armour, which will most likely face risks maintaining their inventories because of supply constraints from Vietnam as early as this holiday season. Should those supply challenges materialize, then consumers will almost certainly shift their spending from goods to experiences and travel.

While many apparel and footwear companies have used inventory shortages as a profitable business and marketing strategy—think of Nike and some of its hard-to-find sneakers—for most competitive markets, not having goods in stock often raises the risk of turning consumers away.

As a result, analysts have been talking about a shopping season with fewer discounts as companies raise prices—equivalent to smaller or no holiday markdowns—to lessen the impact from inventory shortages. 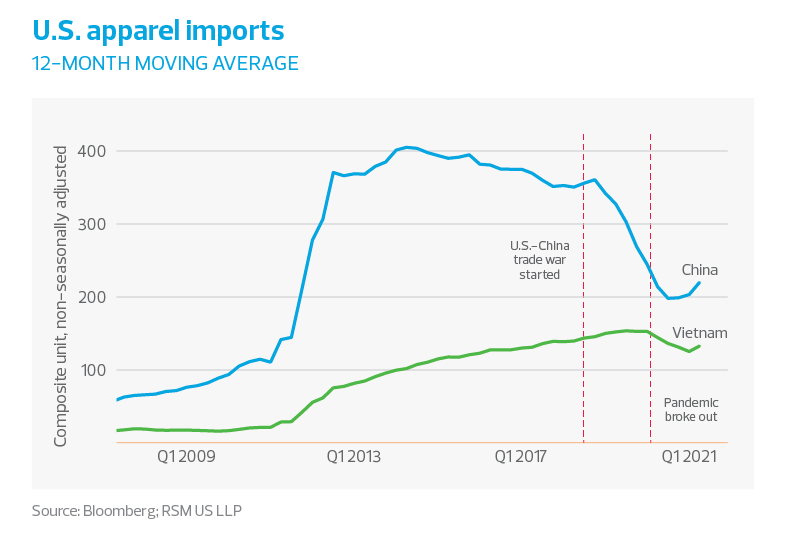 The other solution, implemented by several companies like Designer Brands, which owns DSW, and Lakeland Industries, which sells protective clothing, is to quickly move back to China from Vietnam. Companies are doing this despite the potential significant extra costs of relocation, and the higher wages and tariffs compared to Vietnam.

This suggests that companies are willing to sacrifice short-term profits to avoid inventory shortages, which can be even more costly.

The shift in sourcing strategy shows a temporary reversal of a trend that predates the pandemic: companies moving their production from China to Vietnam, which was accelerated by the U.S.-China trade war in 2018 and 2019.

On a 12-month moving average, U.S. apparel imports from Vietnam climbed steadily from 2011 to 2019, while imports from China stagnated from 2012 to 2018, before declining sharply during the trade war.

Many companies shifted production to Vietnam as trade tensions between the United States and China escalated starting in 2018.

One bright spot comes from the recent change in the Vietnamese government's approach to combating COVID-19, switching from extreme restrictions to partial opening while pushing for faster vaccination rates by using not only Pfizer, Moderna and AstraZeneca vaccines, but also Sinopharm from China and Abdala from Cuba.

The change in approach comes in the wake of a recent letter to the prime minister from major international commerce associations representing foreign companies in Vietnam, asking for a more flexible opening plan. Companies that planned to move to Vietnam are reported to have been reconsidering, at least for now.

Earlier, a trade group representing Adidas, Gap and other major fashion brands lobbied in July for more vaccines for Vietnam, while at the same time, the American Apparel & Footwear Association also asked President Biden to ship more vaccines to Vietnam.

The prolonged and significant disruption to the U.S. apparel and footwear retail ecosystem is expected to last until at least next summer. But recovery will depend on vaccination progress in Vietnam, where only 6.9% of the population has been fully vaccinated, according to data from VnExpress.

Without the vaccine, Vietnam’s economic recovery will continue in fits and starts, and the global economy will feel the effects.