Biden outlines next round of fiscal aid

President Joe Biden put forward an ambitious $1.9 trillion fiscal aid plan to address the public health crisis, the damage caused to the economy by the pandemic and the rollout of a national vaccination program. If enacted as proposed, which is highly unlikely, the plan would imply $2.9 trillion in aid pumped into the economy in the near term, which underscores our robust gross domestic product forecast of 5.4% for the year, with risk of a quicker pace of growth. To put this in perspective, this bill would imply that the total effort by the federal government to offset the impact of the pandemic would be roughly $5.8 trillion, or 26.7% of GDP. 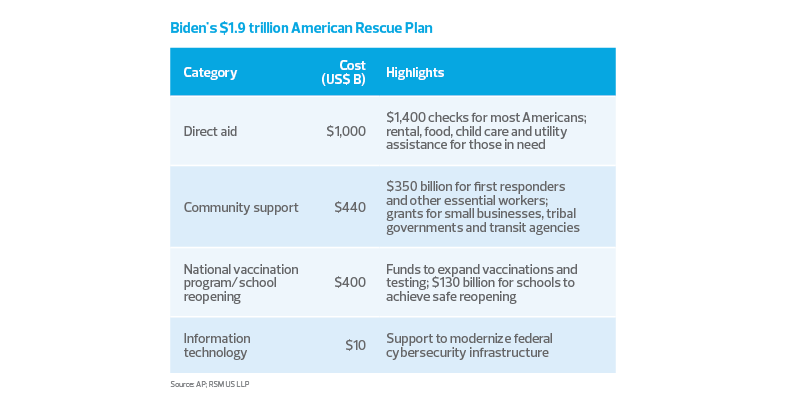 While we do not think that the package will be passed as is, much of it will be put into place and provide what has been lacking for some time: A national program to address the greatest health crisis in over a century and the means to put forward a coherent and competent plan for vaccine distribution. In our estimation, this package will bolster not only growth but also public confidence.

But as with any aid program, the devil is in the details, and this plan provides a framework for understanding the Biden administration’s priorities. Most important, the package will have to work its way through the legislative process and garner enough support in the Senate to avoid any potential filibuster. For this reason, the total size of the package and its composition could get larger and change, or get smaller. If reconciliation has to be used, then the total package will be smaller if the Democrats must find offsetting tax hikes to push it through.

The portion of the package that will garner the most attention is the additional $1,400 in one-time checks, which would be on top of the $600 checks that were part of the aid package passed in late December. In addition, the Biden administration will ask for an unemployment insurance supplement of $400 to assist hard-hit workers, which is just above the $300 provided in December.

MIDDLE MARKET INSIGHT: This program, though unlikely to be passed as is, provides a comprehensive national solution to the ongoing pandemic health crisis.

The Biden economic team also inserted an increase in the minimum wage to $15 an hour, which one would assume is an attempt to address the growing economic inequality around the economy. That would be an increase from the current $7.25 an hour, and there was no language around how quickly this would be phased in.

State and local governments would receive aid to the tune of $440 billion, which includes funds to reopen schools, grants and loans to small businesses, and outright relief for state and local governments to prevent a loss of jobs that we think could be as high as 1.5 million. At the core of the proposal is $160 billion for funding a national vaccination program, expanded testing, and the acquisition of protective gear and supplies.